Hot Chocolate + Cream Puffs = possibly one of the best Christmas treats! A crispy shell of choux pastry, with a dark chocolate and white chocolate whipped cream filling inside, and lastly topped with a lightly toasted fluffy meringue to complete each and every one of the puffs! 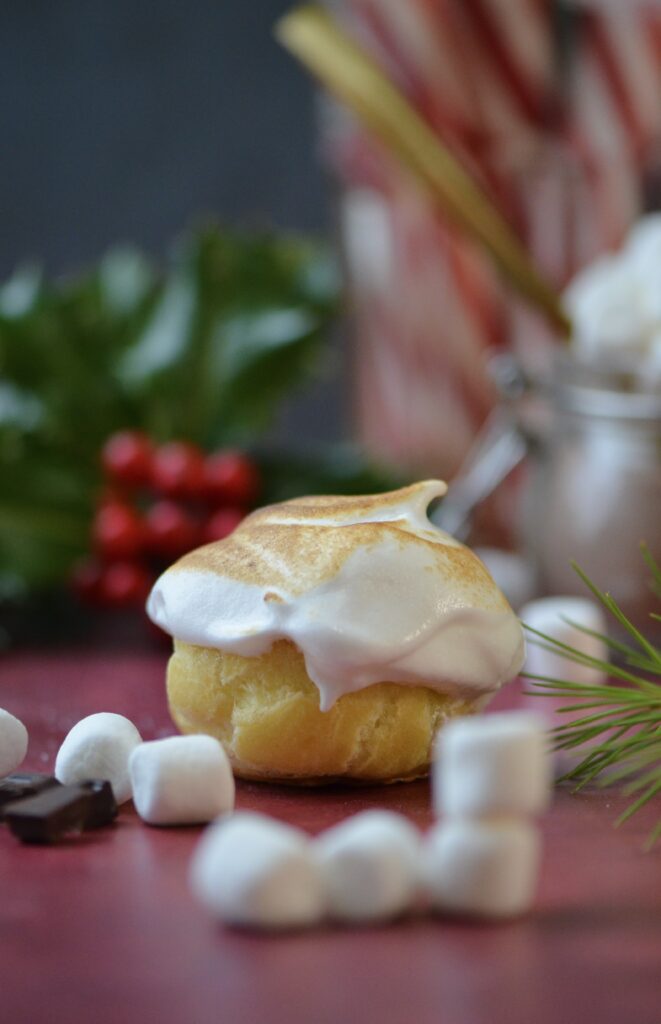 We absolutely adore cream puffs, and hot chocolate so we thought why not combine the two? They are super cute and so so good! Everyone will rave about how good these sweet little puffs are. 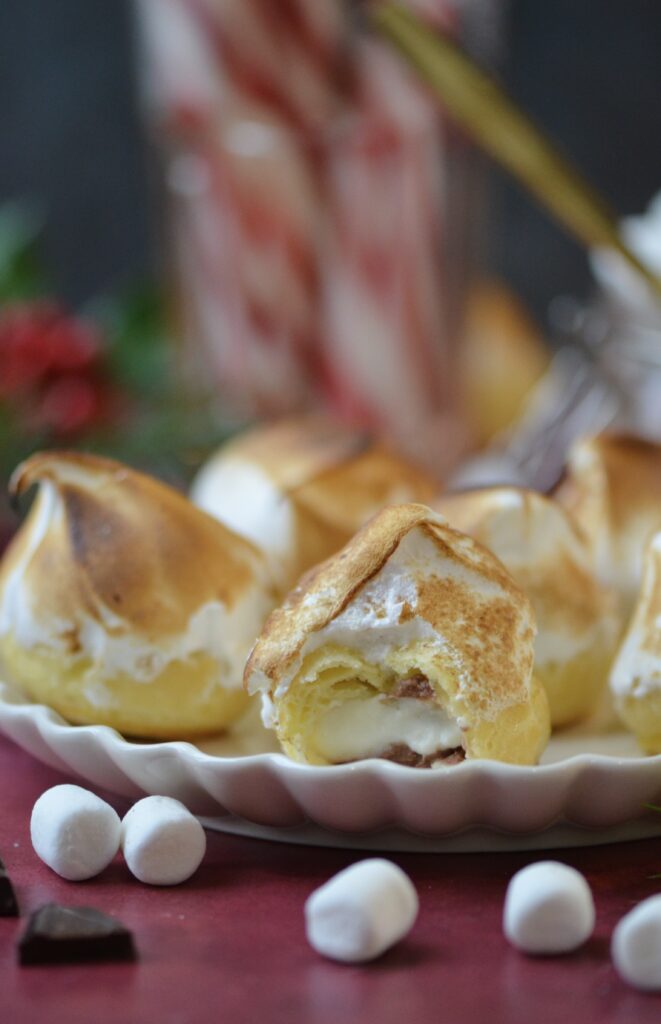 Butter: This recipe uses 1 stick of butter. You don’t need to melt or soften it, since it will melt while on the stove-top.

Sugar: Since the cream itself is pretty sweet, the puff only needs 1 tsp. of sugar.

Salt: Salt balances out the sweetness and adds flavor!

Water: A basic ingredient in most choux pastry recipes!

Flour: Flour is another must ingredient in choux pastry.

Eggs: It works best if you use room temperature eggs. This recipe uses 4 eggs, plus one more for the egg wash on top. 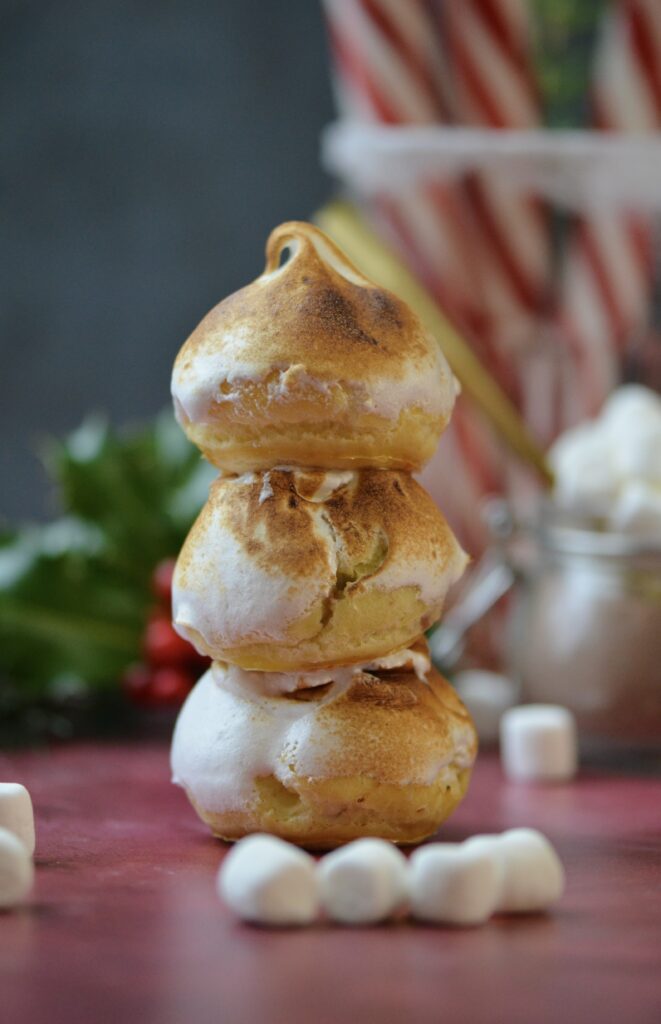 This recipe has two different fillings. One of them is dark chocolate, and the other is white chocolate! Both of them are super simple; just made out of cream, chocolate, and vanilla extract! Just pour hot cream over the chopped chocolate, then add it to the whipped cream, fold it in and that’s it! 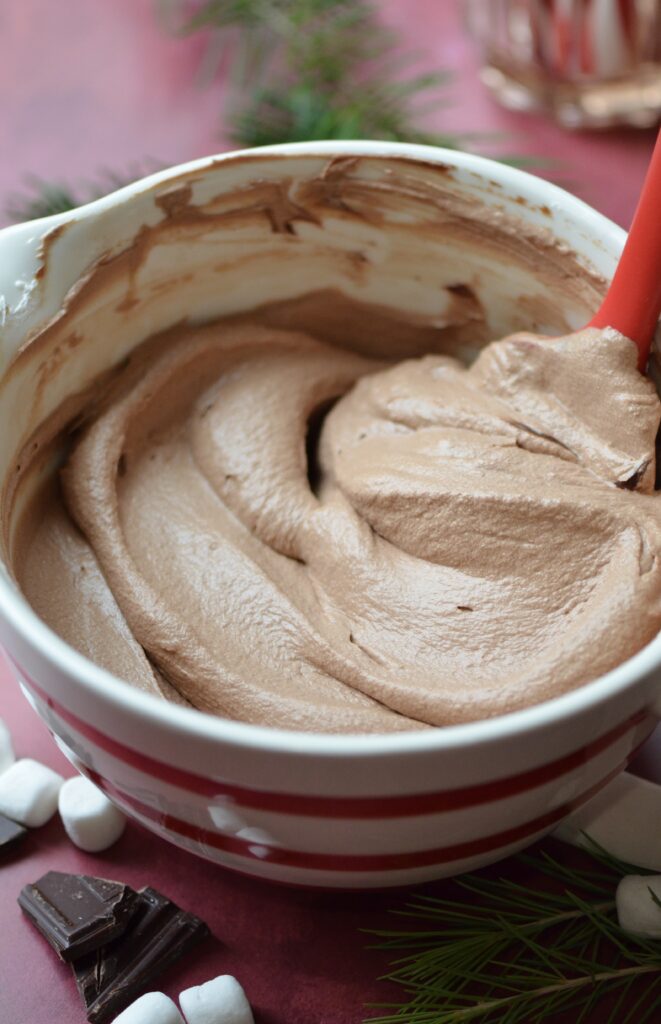 These are such a fun little Christmas dessert to make this season! Make it for a party and your guests will be amazed. Like they are just too cute! 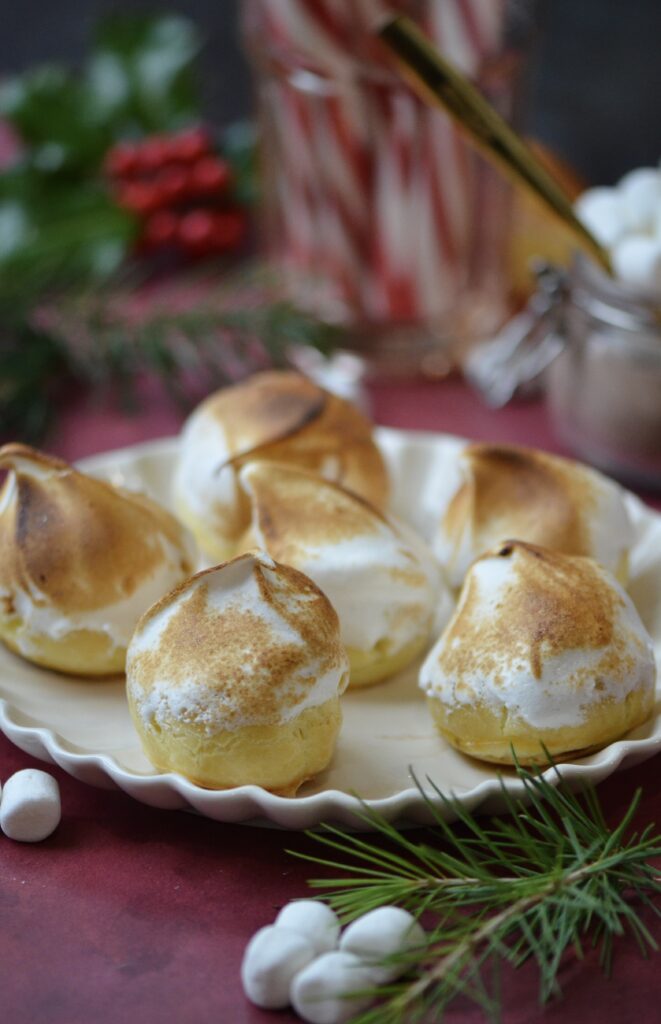 As always, we hope you guys enjoyed this recipe, and if you try it comment down below and tag us on Instagram so we can it! -Aubrey and Tara

Hot Chocolate + Cream Puffs = possibly one of the best Christmas treats! A crispy shell of choux pastry, with a dark chocolate and white chocolate whipped cream filling inside, and lastly topped with a lightly toasted fluffy meringue to complete each and every one of the puffs!

For the Whipped Cream Filling:

For the Cream Puffs:

For the Meringue Topping:

2. To make the Choux Pastry: Preheat the oven to 450 degrees F, and line two baking sheets with parchment paper. In a medium saucepan, bring 1/2 cup butter, 1 tsp. sugar, 1/2 tsp. kosher salt, and  1 cup water to a boil. Remove from heat and immediately stir in 1 + 1/4 cups flour with a wooden spatula. Cook over medium-high heat, stirring constantly, for about 3 minutes, until the mixture pulls away from the sides. Remove from heat, and beat with an electric hand mixer, to let it cool slightly, for about 2 minutes. Add in 4 large room temperature eggs, one at a time, beating until fully incorporated. Once it’s done, the batter should be slightly sticky, smooth, and shiny. Transfer that to a piping bag, fitted with a plain round tip, and pipe into rounds about 1 inch in diameter, and 1/2 inch high. If you get peaks while piping, dip your finger into the water, and smooth out the tops. Brush with egg wash, and right before baking, reduce your oven to 350 degrees F. Bake until lightly golden brown, for about 25-30 minutes. Transfer to a cooling rack to let cool completely.

3. To make the Meringue Topping: To a large bowl, add in 3 egg whites, and beat that with a hand mixer until stiff peaks form. Now with the mixer still on, slowly add in 1 cup of powdered sugar, and beat until combined.

Welcome to Our Blog!

We are Aubrey and Tara, the sisters behind the blog! On this blog, you’ll find easy, family favorite recipes of ours that you’ll love! Enjoy browsing through our recipes!